Cross-country or Nordic skiing is a great activity with all-round health benefits.  Even muscles that don’t seem to be in use are actively involved to balance and coordinate the entire body. Burns lots of calories. Nordic skiing burns more calories than any other form of exercise or sport — up to 1,122 calories per hour for vigorous mountaineering! Improves cardiovascular endurance and health. 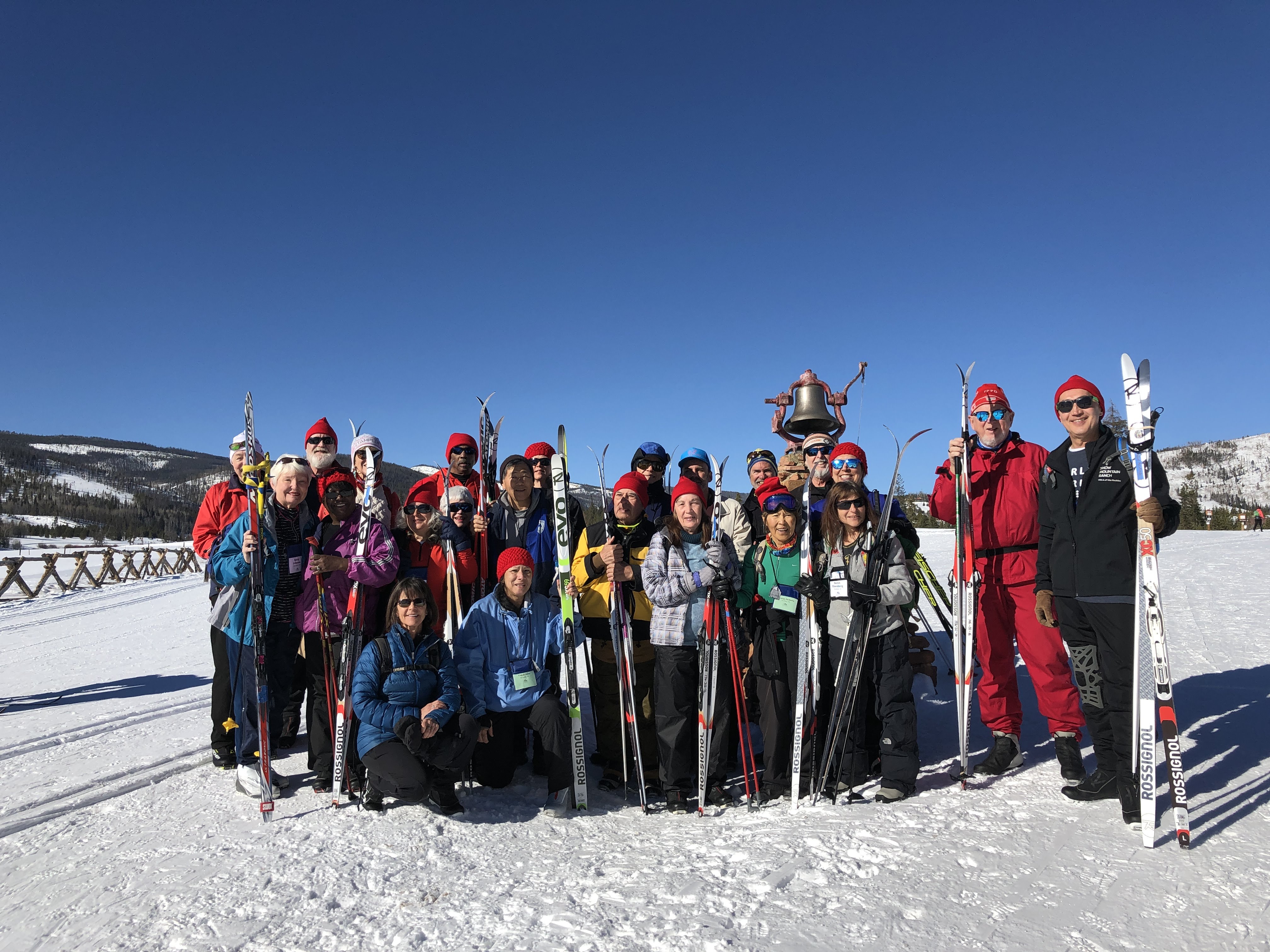 We have chosen to participate in the annual week-long Ski for Light events.  Skiing. Sharing. Learning. The mission of Ski for Light is to enhance the quality of life and independence of visually or mobility-impaired adults through a program of cross-country skiing. We formed Ski for Light Team Texas in the fall of 2016.

Thankfully, due to having the technology to help us, we were able to span vast distances at the speed of light, and a diverse community of SFL enthusiasts eager to stay connected with each other, to share their experiences, and to discover what is possible by doing so. Adeptly led by Bonnie O’Day, the planning committee for January’s Ski for Light International virtual event crafted a program that exhibited the variety of skills and interest within our community: It encompassed our commitment to fitness and to remembering our history and heritage. It brought us together from all over the world. The more than 430 particpants registered for the virtual event, and all the individual sessions boasted large participant counts, reflecting the enthusiasm to connect. Please read on for Bonnie’s article recapping the festivities.

When President Tim McCorcle asked if I were interested in chairing the 2021 SFL International event (to take place in Granby, Colorado), I jumped at the chance. I love skiing there, and we have stayed at the YMCA of the Rockies several times. They know us and we know them, so organizing the week would be relatively easy, as these things go. Then along came COVID-19!

We realized that holding an in-person event would be impossible. My task shifted to organizing a virtual one, which neither SFL nor I had ever done before. Those of you who know me know that I am a reasonably skilled technology user, but my use is of necessity rather than of desire. So I was not excited about organizing an event that relied so heavily on digital platforms, computers, or smart phones. But I knew SFL had some great resources. I realized right off the bat that I needed to identify someone who loved learning about and implementing new technology and making it easy for blind people to use. That, of course, was Judy Dixon. I needed some creative people to figure out what types of sessions we would have, and I thought immediately of Wendy David, Julie Coppens, and Lauren Hein. The people who could bring a historical perspective and make sure we honored our Norwegian roots were Marion Elmquist and Scott McCall. Who better to handle the auction than someone who shares my first name–Bonnie Hartman. Larry Showalter would make sure all the information was accessibly posted on our website, and Melinda Hollands would recruit new people through her diligent public relations efforts. Finally, I roped in husband Bob Hartt, who agreed to be the applications coordinator, and helped to orchestrate the fitness challenge–to make sure we all stayed in shape. Tim McCorcle helped to officiate difficult decisions and financial matters. With a committee like that, how could I go wrong?

Our 2021 International Event was truly a success: 438 people registered, including more than 140 people who had never attended an SFL week, and many who had not attended for a long time! We received lots of positive feedback, including one person saying, “The spirit and friendship was surely the goal, and you succeeded! Fun on many levels!” Another attendee said, “I really enjoyed participating and connecting with everyone. I had that SFL feeling!”

The opening night featured an introductory video entitled “This is Ski for Light” and a show stopping song by Andrea Goddard, “The Edge,” by Heidi Muller. The Norwegian Ambassador to the United States, Anniken Krutnes, offered a welcome from Norway to the group. We held six fitness classes: stretch, yoga, core strength, Sport-Cord and fitness with a stretch band, as well as a fitness challenge. Twelve special interest sessions included bread baking, climbing a mountain, dragon boating, and many more. Our live on-line auction raised more than $11,500! We organized Zoom rooms for informal socialization each evening–several lasted until the wee hours! We capped off the event with closing ceremonies, featuring singer/songwriter Jim Salestrom, a 100th birthday celebration for Charlie Wirth, and several well-deserved awards. We received greetings from Norway, from the Secretary General of Ridderweek, Anne-Kristin Wadahl, and a special appearance from the ski tracks at Beitostolen by Atle Hovi, CEO of the Beitostolen Resorts. He was at a virtual start line at the beginning of the 5 K track. The “start” was narrated by long-time SFL friend and leader of the Norwegian delegation, Svein Thorstensen. Many of these presentations can be found on this YouTube playlist and we’ll be adding the special interest sessions to this playlist soon. There was even SFL gear to purchase for our virtual event, though the gear was real, not virtual. Thanks to Leslie Maclin, we sold about 80 snazzy royal blue headbands featuring our logo, and, due to Marion Elmquist’s efforts, we even had SFL 2021 event shirts! Both of these items will be available in limited numbers in the sales room next year.

We learned that SFL can hold its annual event remotely, though we certainly hope we’ll never have to do it again. A virtual event is not an adequate substitute for the real thing. But we are looking at trying to integrate some Zoom programming to keep us connected throughout the year.

In 2020, Team Texas sent 16 participants to Ski for Light held in Casper, WY. It was a really crazy week for weather when a couple of days saw the ski mountain having to be closed due to high winds exceeding 50 mph and roads not being passable.  Ski busses that were already in route were caught on the icy roads for hours. With the “no ski” days, the SFL programs committee quickly came to the rescue with a number of creative alternate activities. Fortunately, the weather cleared at the end of the week for the race/rally and everyone had an amazing time. See Team Texas 2020 photos.